A love for peanut butter is a love like no other. The sometimes smooth, sometimes crunchy spread is so amazing, you might start feeling like you're legitimately addicted. Because peanut butter goes so well with so many foods, you may have thought about having it for breakfast, lunch and dinner. And when snack time rolls around, you can bet your Skippy that you're eating some PB straight out of the jar.

So, for those who are hopelessly devoted to peanut butter, here are 13 ways glorious peanut butter can help your body, your soul and even the rest of the world. 2. It's usually vegan and gluten-free, so everyone can eat it.

The ingredients in natural peanut butter are pretty simple, at least if you're getting a quality spread. All it should include are crushed peanuts and maybe a little bit of salt. But most of us get a big commercial brand, like JIF or Peter Pan, which usually contains some more ingredients -- most likely hydrogenated oils, sugar, and salt, which are also gluten-free and vegan-friendly.

3. Peanut butter is good for your dog.

If Cesar Milan approves of feeding his dog peanut butter, then you should too. Little does your dog know, it's giving him some great vitamins and nutrients, like vitamin E and protein.

4. It provides some essential vitamins to humans, too.

Did you know that peanuts are one of the best sources of magnesium? It's true. Two tablespoons of smooth peanut butter contains 49 milligrams of magnesium, which is 12 percent of your daily value. And magnesium is really good for your body! It helps in carrying calcium and potassium across cell membranes. The National Institute of Health explains that this process is "important to nerve impulse conduction, muscle contraction, and normal heart rhythm."

5. Peanut butter and bacon are a match made in heaven. 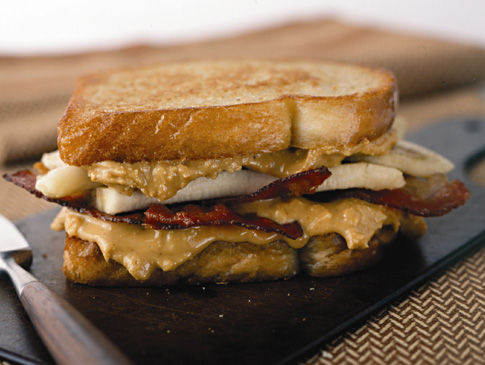 In 1983, the Evening Independent decided to introduce their readers to something called the "Peanut Butter Banana Club." The recipe calls for six (!) slices of bacon, one large banana, brown sugar, lemon juice, whole wheat bread, lettuce and crunchy peanut butter. And a lot of people seem to enjoy this version of the club sandwich. In fact, former New York City mayor Michael Bloomberg once said that his last meal on Earth would have to be a version of the peanut butter-banana-bacon sandwich. And he has some pretty detailed specifications. He told New York Post, "[...] it would be Wonder Bread toasted, with Skippy Super Chunky melted on it, slices of overripe banana and fresh crisp bacon."

6. On the topic of salty bacon, peanut butter can help counteract too much sodium in a diet. If you have found yourself eating too much salty food, peanut butter can come to your rescue. It's chock full of potassium, a mineral that, according to the American Heart Association, relaxes blood vessels, which helps lower blood pressure. They also state that eating more potassium allows for more sodium to be released through one's urine. Peanut butter ranks as a "high potassium food" with 210 milligrams in a two-tablespoon serving of the smooth variety.

7. Peanut butter could really help you stay on that diet. You may be shocked to believe this, but it's true. Even though peanut butter has a good amount of fat in it, don't forget that it's a healthy kind of fat. It's also a very filling food. Therefore, it keeps dieters fuller for longer, helping them resist the urge to mindlessly snack. Researchers at Harvard and Brigham and Women’s Hospital found in a study that people eating moderate-fat items, like avocados, oils and peanut butter, were able to stay on a diet longer and keep weight off for a longer period of time than those who ate a low-fat diet, which involved eating items with only 20-percent fat.


8. The more peanut butter and jelly sandwiches you eat, the more you could be helping the earth. In an effort to get people to start consuming less meat-based food to reduce our carbon footprint, The PB&J Campaign urges people to eat plant-based sandwiches (specifically PB&Js) instead of meat-based sandwiches for lunch every day. What a difference it makes! The campaign's website states that each time you eat a PB&J for lunch instead of red meat, like a burger or a ham sandwich, you're shrinking your carbon footprint by almost 3.5 pounds of greenhouse gas emissions. You'll also save 133 gallons of water and 24 square feet of land per each peanut butter and jelly lunch.

9. It can help you get the gum out of your kid's hair.

We've all been there. Your kid's chewing some gum and then all of a sudden it's stuck in her hair. What's a parent to do? Grab the peanut butter, of course! All you have to do is rub some peanut butter on the gum-affected area and the natural peanut oils will loosen the stiff gum, allowing for easy removal. Just make sure it's the creamy kind (unless you like peanut bits in your hair).

10. Girls who eat peanut butter could lower their risk of developing breast cancer. In a study done by the Washington University School of Medicine in St. Louis and Harvard Medical School, it was discovered that girls between the age of nine and 15 who regularly ate peanut butter were 39 percent less likely to develop benign breast disease by 30. We guess that means it's good news that the average American kid eats 1,500 PB&Js before he or she graduates high school!

11. Peanut butter has literally saved thousands of children from starvation.

Back in 1996, a French scientist named André Briend desperately wanted to find a way to create a fast, ready-to-eat nutritional food for malnourished babies in underdeveloped countries. He made a product called Plumpy'nut, a 500-calorie silver foil package that contains a peanut butter paste filled with nutrients and vitamins that helps children get the healthy nutrients they need.

In a New York Times article, Doctors Without Borders nutrition specialist Dr. Milton Tectonidis explained just how much Plumpy'nut helped countries in crisis: "We've seen it working. With this one product, we can treat three-quarters of children on an outpatient basis. Before, we had to hospitalize them all and give them fortified milk."

In 2010, the PlumpyField network (the producers of Plumpy'nut) came together with the United Nations to officially endorse a world action plan against malnutrition.

12. Peanut butter probably has as many antioxidants as your healthy juice.

Now you don't have to feel left out when your friends keep boasting about all the antioxidants in their juices. You can tell them that your peanut butter sandwich has just as many antioxidants. According to the Peanut Institute, peanut butter contains phenolic acids, which are known to possess an "antioxidant function" that helps protect your body against various cancers and coronary heart disease.

Also, after testing a dozen different peanut varieties for their antioxidant count, Steve Talcott, an assistant professor of food science and human nutrition at the University of Florida's Institute of Food and Agricultural Sciences, concluded, "When it comes to antioxidant content, peanuts are right up there with strawberries." So now you can definitely call peanut butter (as long as it's natural) a superfood.

13. Last, but definitely not least, you have the potential to eat peanut butter for breakfast, lunch and dinner.

Peanut butter is versatile. You have the option of spreading it on something, mixing it with noodles, coating meat with it or turning it into a delicious sauce, just to name a few. Seriously, the options are endless. This would be our perfect -- albeit, gluttonous -- peanut butter-filled day:

We would totally start the day off right with these peanut butter and jelly pancakes from Heather Christo. For lunchtime, we'd stray away from the usual PB&J and whip up this "Peanut Butter and Jel-brie" from Finding Clairity. When dinnertime rolls around, we would get down with these Crispy-Roasted Indonesian Peanut Wings from Food 52. Then we would finish the day off with a sweet note with this "Peanut Butter Ice Cream with Concord Grape Coulis" from Food 52.