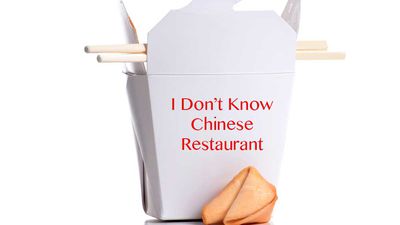 More often than not, “I don’t know” is a common response to the question, “What do you want for dinner.” However, the phrase is taking on a whole new meaning thanks to a new restaurant in Rochester, N.Y. According to the Democrat and Chronicle, it is named I Don’t Know Chinese Restaurant.

Yes, the name of biz is really: I Don’t Know Chinese Restaurant opens in Rochester http://t.co/avRn96f1dy via @DandC #ROC

Owner Jessie Dong explains that the moniker was inspired by her three children who frequently say “I don’t know,” whenever she asks them what they want to eat. Dong adds that when she asked her family what she should name the restaurant, she received the same response and thus the name was born. I Don’t Know Chinese Restaurant — which serves traditional Chinese American dishes — only has two table, Most customers opt for take-out.

While the name can be confusing (in a very “Who’s on First” sort of way), is I Don’t Know really any worse than punny eateries like Thai Me Up, Tequila Mockingbird, Fu King Chinese, and CockAsian?